...but not if you have CERV-UV Integrated Ultraviolet Germicidal Irradiation 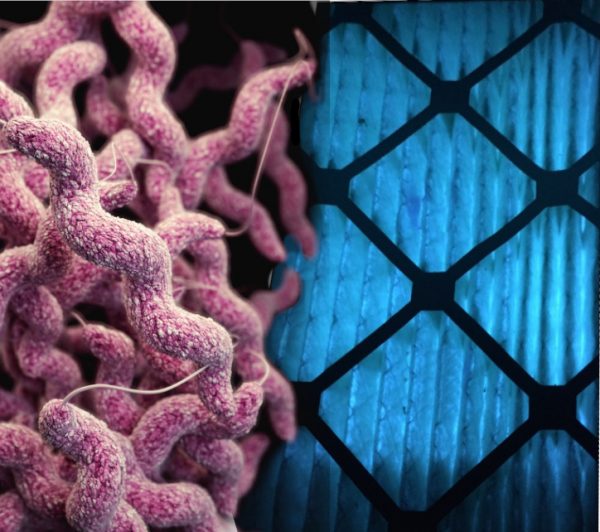 Microbes are ubiquitous in indoor environments. They float in the air on their own and hitchhike on perpetually airborne particles in the air you breathe. Filters are your first defense to capture microbes in your air. But what happens to the microbes on your filters?

We conducted a series of experiments to investigate microbial life on CERV2 indoor and outdoor filters, and the results are very interesting! We hope our results incentivizes everyone to recirculate and filter air, to change filters at least every 3 months, and to consider installing CERV-UV, our UVGI unit that sanitize indoor air and filters, like the sun does to our outdoor air.

Read on to learn more!

Our first generation CERV did not have UVGI, but our metal heat exchangers were built to last and to not be an inviting host to microbial colonies. This picture of the 11 year old CERV heat exchanger in Equinox House’s 2010 CERV unit shows how well they hold up.

How do plastic energy recovery cores hold up? This photo of a filthy plastic heat exchanger core after only 2 years of operation demonstrates the difference.  Here's another example after four years. Yes, you can wash the plastic core (it's "required" annual maintenance), but do you really think it is “clean”? And how many people actually do it? Adding insult to injury, the custom filters protecting the plastic core are more expensive than the energy they recover! Are your lungs protected better than this plastic core?

We designed the CERV2’s integrated UVGI (CERV-UV) for “triple action” sanitizing. In addition to killing microbes in the air stream, CERV-UV bathes the CERV2 heat exchanger surface and indoor air filter in UV radiation to kill microbes on their surfaces. Figure 1 is a photo of the CERV2’s indoor filter illuminated with ultraviolet light from CERV-UV (note: follow our instructions….turn CERV-UV off when changing filters).

We conducted a series of three tests to examine microbes on CERV2 filters.

Our experimental procedure is described in the attached appendix so you can conduct your own test!

Here are the results:

Figure 2 shows photos of four incubated Petri dishes. One dish had 10ml of sterile water from the same source used for the filter sample dishes as a control. The sterile water dish had no bacteria growth, indicating proper sterilization of water and handling of materials.

A second Petri dish contained a filter sample cut from a brand new just removed from the filter box, MERV13 filter. The 24 pack filter box sits next to the CERV2 in Equinox House, and 12 of the 24 filters in the box have been used (that is, the box is a bit more than a year old with 8 filters used per year). No live bacteria were observed in the Petri dish from the new filter sample.

A third Petri dish contained a filter sample from a visibly dirty outside filter that was in the CERV2 from mid-December to the end of April, spanning winter months when outdoor microbial life is low to spring when nature is bursting with enthusiasm. No bacteria! Nature’s own air scrubbing and sanitizing solar UV is hard at work keeping outdoor air healthy!

The fourth Petri dish with a sample from the indoor filter is a different story. The fifteen CFUs (actually, we could see 16, but 15 very clearly) grown from the sample indicate nearly 80,000 live, viable bacteria having a party on the indoor air filter! If bacteria deposition is cumulative, this indicates 600 bacteria per day are caught by the filter, but many more tests are required to understand bacteria filter dynamics.

Figure 3 shows side-by-side comparison of the indoor and outdoor filters and the Petri dishes. Looks are deceiving! Visual inspection might lead one to think the outdoor filter is “dirtier”, but it is not.

Our second test used the clean, new filter that was sampled in Test 1. The filter was placed in Equinox House CERV2’s indoor air duct. UVGI was off for 15 days of operation. The house was vacant for 5 days during the two week period. A sample from the filter was removed after returning home for one day.

Figure 4 shows 2 CFUs on the Petri dish, resulting in an estimated 10,320 bacteria on the indoor filter. If bacteria deposition is cumulative, 690 bacteria per day are deposited, similar to the bacteria per day for the 4 month old filter. Presumably, if microbial life in indoor air is due to human (and animal) presence, the 5 day absence without human or animal presence may indicate that microbes in the house air are continually removed during the vacancy, resulting in continued build up on the filter.

The two week old indoor filter was left in place after the sample was removed for Test 2. CERV-UV was activated as shown in the Figure 1 photo (note the two taped sample holes for Test 1’s “new filter” sample and Test 2’s two week sample.

Figure 5 shows a photo of the Petri dish with no CFU formed after 6 days of CERV-UV illumination, demonstrating that collected bacteria had been inactivated.

What about viruses? These results do not show the impact of CERV-UV on virus viability because different culture techniques must be used (viruses have to hijack cellular machinery to replicate unlike bacteria that can grow and multiply on their own). We know, however, that smaller viral matter requires less UV energy for inactivation than bacteria, indicating that if bacteria are killed, virions are also likely to have been inactivated.

Build Equinox strives to follow Nature’s lead to make our indoor air environment as nice as fresh, clean outdoor air. Our goal is to reverse the continuing decline of our health, well-being and productivity so we can enjoy the pleasures of life!

The tests are similar to ones you may have conducted in high school biology. This is a test you (or your students) can perform, too! Here are the steps we followed.