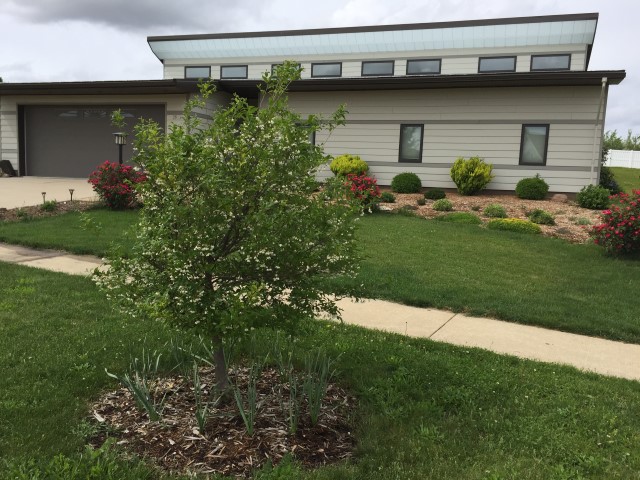 A Styrax Japonicus tree at Equinox House celebrates Frank Lloyd Wright’s Asian inspired architecture and organic materials design concepts. Equinox House is constructed with ICF (insulated concrete forms) and SIPs (structural insulted panels). Tree resin from a relative of the Styrax Japonicus was used to produce polystyrene, one of the earliest polymers. The “Equinox overhang” above the clerestories, reminiscent of Pagoda roofs, acts as a solar concentrator during the winter and provides summer shade from equinox to equinox.

A Styrax Japonicus, also known as a Japanese Snowbell tree, is blooming in front of Equinox House. We planted the tree in celebration of Frank Lloyd Wright’s Asian inspired architectural designs and emphasis on organic architecture. The tree is nearly 6 years old, and when mature, will be 20 feet tall with a spread of 20 feet. The blooms are delicately scented and densely spread throughout its foliage.

Equinox House is built with Styrofoam SIP (Structural Insulated Panel) walls and roof and ICF (Insulated Concrete Form) foundation walls. A detailed account of its construction is included in November issue of our ASHRAE Journal article series. Frank Lloyd Wright was an early user of the Forest Products Laboratory’s SIPs concepts in the 1930s. Plywood was also a novel material at that time that Wright regularly implemented for house and furniture construction. 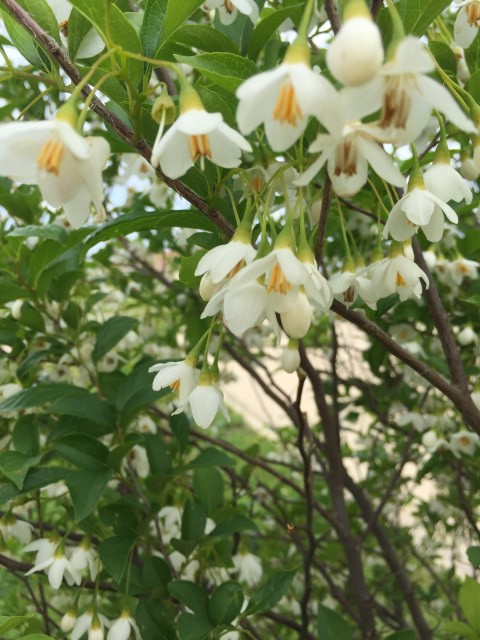 The delicate blossoms of Styrax Japonicus have a light, mellow fragrance.

In the 1950s, architect Alden B Dow, son of Dow founder Herbert Dow, developed the modern day SIP by incorporating Dow’s new Styrofoam between two plywood panels. Many of Alden Dow’s early SIPs homes can be seen today in his hometown of Midland Michigan. Dow’s home and studio are available to tour, and for architecture fans, is a must see. His home blends into the surrounding terrain and gardens, with novel materials such as brick made from flyash waste. Dow studied under Wright, and while their styles are quite different and their friendship foundered, the same simple elegance is found in his homes and buildings. 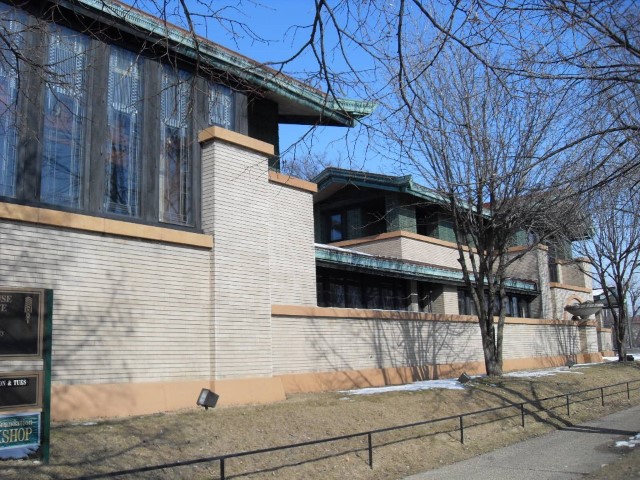 Frank Lloyd Wright’s “Dana Thomas” house is the ultimate in home renovation. This house, located in Springfield Illinois, displays Wright’s Japanese influenced design that transformed a 19th century Italianate structure into an exquisite, unparalleled home. Of course one’s checkbook is an important part of what can be done to change a house as was the case for this home. Many cost effective improvements can be made without great expense.

Today, we have many good choices for constructing efficient and sustainable homes. The Styrax Japonicus is also a reminder that polystyrene (Styrofoam), one of the earliest polymers, was originally a biomaterial made from a tree resin. It is a simple material that is 100% recyclable into polystyrene for reuse as building insulation. When Equinox House is ready for deconstruction, we hope a new home can be largely created from its materials. Polystyrene foam insulation carries a Cradle-to-Cradle Silver certificate. Recycling infrastructure for polystyrene foam is immature and requires development, but it wasn’t that long ago that we were unable to recycle magazines, soda bottles (PET) and milk jugs (PE). 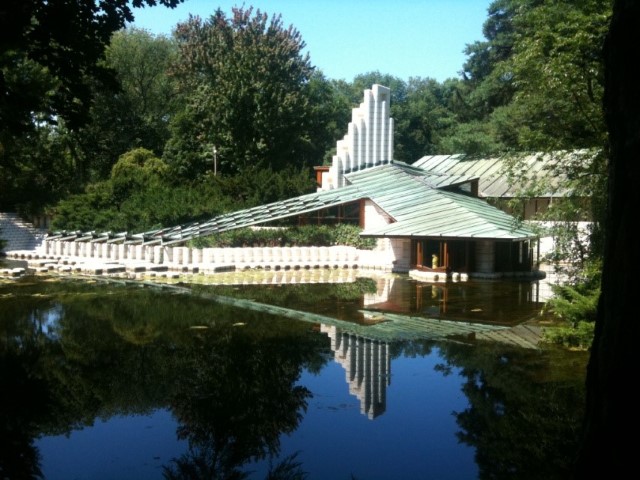 The Alden B Dow home and architecture studio in Midland Michigan is difficult to photograph because it seamlessly moves in and out of the surrounding terrain. Alden Dow, son of the founder of Dow Chemical, studied under Frank Lloyd Wright, and was a brilliant architect in his own right. He developed the modern foamcore SIPs panel in the 1950s, using Dow’s novel Styrofoam insulation.

SIPs construction allowed Equinox House to be sealed to less than 0.6 ACH (Air Changes per Hour) at 50Pa pressure difference in a straightforward manner. Caulking and sealing seams on the 80 panels that make up Equinox House’s wall and roof required 75 tubes of caulk and 17 hours of labor. A detailed account of the sealing process is included in the January issue of our ASHRAE Journal article series. Sealing a home to this level decreases the ratio of unhealthy infiltrated air relative to fresh, filtered air that a CERV smart ventilation system delivers to a home’s occupants.

We wish you the best on your home construction projects. Building a home is one of the greatest responsibilities we can undertake. The decisions made affect the health and comfort of several generations of occupants beyond us.